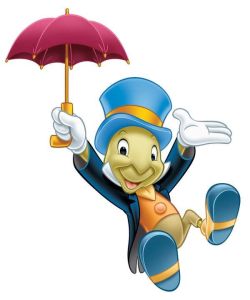 Give a Little Whistle

“Give a little whistle, and always let your conscience by your guide.” Jiminy Cricket (1)

In the movie, Pinocchio, the little puppet wanted to be a good boy and Jiminy was going to help him. All he had to do was whistle. Oh if that were only possible!!

Saul was a Jew, zealous toward God, “I am verily a man which am a Jew, born in Tarsus, a city in Cilicia, yet brought up in this city at the feet of Gamaliel, and taught according to the perfect manner of the law of the fathers, and was zealous toward God, as ye all are this day.” [Acts 22:3]

He was among the religiously elite class of Pharisees, “….after the most straitest sect of our religion I lived a Pharisee.” [Acts 26:5]. He succeeded beyond his equals far and above any other. “And profited in the Jews’ religion above many my equals in mine own nation, being more exceedingly zealous of the traditions of my fathers.” [Galatians 1:14]. Concerning the Law of Moses he kept it diligently. [Philippians 3:5]

Because of his zeal toward God, he persecuted the sect called “the way” because he knew in his heart that it was wrong, even consenting to the death by stoning of Stephen. He persecuted Christians, consenting to their deaths, breathing out threats and slaughter against them. Delivering both men and women into prison. He petitioned the chief Priests to give him permission to go to other cities and synagogues, that if he found any “of the way”, he may bring them bound to Jerusalem.  [Acts 7:58 ; 8:1,3; 9:1,2; 22:4]

If God sets the conscience, then what happened to Saul of Tarsus? He said, “I verily thought with myself, that I ought to do many things contrary to the name of Jesus of Nazareth.” [Acts 26:9] He was very sincere about his persecution of the church. [Acts 23:1]

Our conscience is our moral compass, but only if it is set correctly, pointing to true north. In other words, attuned to truth. [John 17:17]

The trouble is that our consciences are sometimes set wrong. Saul, later called Paul, had a conscience that was set toward God, but with wrong, outdated information. [1Timothy 1:13]

If sincerity, based on our conscience, determines whether or not we go to heaven, then Saul was heaven bound while he persecuted the Lord. [Acts 9:4]. A famous denominational Pastor said that he doesn’t know if a Jew, Muslim or an atheist is lost if they don’t follow Jesus. “You know, I’m very careful about saying who would and wouldn’t go to heaven. I don’t know …” (2)

GIVE A LITTLE WHISTLE

Oh, it would be nice if we could just whistle and have Jiminy show up to keep us out of trouble? Jesus is no cricket, and He’s not a pet that we call to do our bidding. No sir, we have been given control over our conscience, and we are to train it. Jesus showed us the way….

The most powerful and effective motivation to obey God’s word is a sincere and deep love of God.

A strong congregation loves God, therefore also loves His word. When I speak to “religious” people, one thing I notice is the lack of knowledge of God’s word and His patterns.

Weak congregations are short on giving; “…attendance to reading, to exhortation, to doctrine.” [1Timothy 4:13] Strong congregations consider FIRST what the will of the Lord is from His divine Word, for it is the truth; [John 17:17]. This enables them to worship in truth [John 4:24], Teach the truth [1Timothy 1:3] and do His work according to the divine pattern [Ephesians 4:12].

They Rejoice in the Lord

When a strong congregation loves God and His word, they will rejoice despite the difficulties that come from living on this side of the Judgement.

Paul warned the early Christians that life was tough, and not many others had a more difficult time than he. The Lord teaches, through Paul, to be content regardless of circumstance. [Philippians 4:11-13] The Lord also taught us to be prepared for trials that every Christian will face and to rejoice. [James 1:2; 1Peter 4:12]

It is Growing and Working

Every congregation has folks that are at varying levels of their maturity. There are new converts, babes in Christ, some more mature, some struggling and overcoming sins and still others that are strong in their faith. [1Corintheans 8:12-31]

It Follows the New Testament Pattern of organization

A strong congregation is striving to attain and to follow the New Testament pattern for its organization. [Philippians 1:1]

They have or are qualifying men to oversee as elders [Acts 20:17; 1Timothy 3:1-7; 1Peter 5:1-2], doing the same regarding deacons to serve under elders, [1Timothy 3:8-13]. In whichever state, the strong congregation has faithful men to see that the work of the Lord is accomplished never losing sight of the ideal.

The strong congregation never waits. It continues to be zealous for good works [Titus 2:14; Revelations 3:19]. They want to be found doing and increasing in the Lord’s work [Matthew 25:14-30], never burying their talents or content with just getting themselves to heaven, because they want to others to be saved also [2Timothy 2:2].

What About the Church in Borger?

I bet, that as you read this article, you were also thinking about our congregation. I believe that we have a strong congregation. Perhaps not like the church in Smyrna which the Lord had nothing negative to say [Rev 2:8], but one that has the ability to overcome what is lacking [Revelations 2:7].

I feel that we are strong because we love God and His word, we rejoice and help each other during difficult times. We all desire for the truth to grow in Borger and that folks respond to the Gospel. I am grateful to you and to God for this local congregation.

That’s just my opinion, but what do you think? If you were to rate our congregation on a scale of 1-10, what number would you give us? If it’s not a 10 for being the best, why not? More importantly, what are you doing to change it?