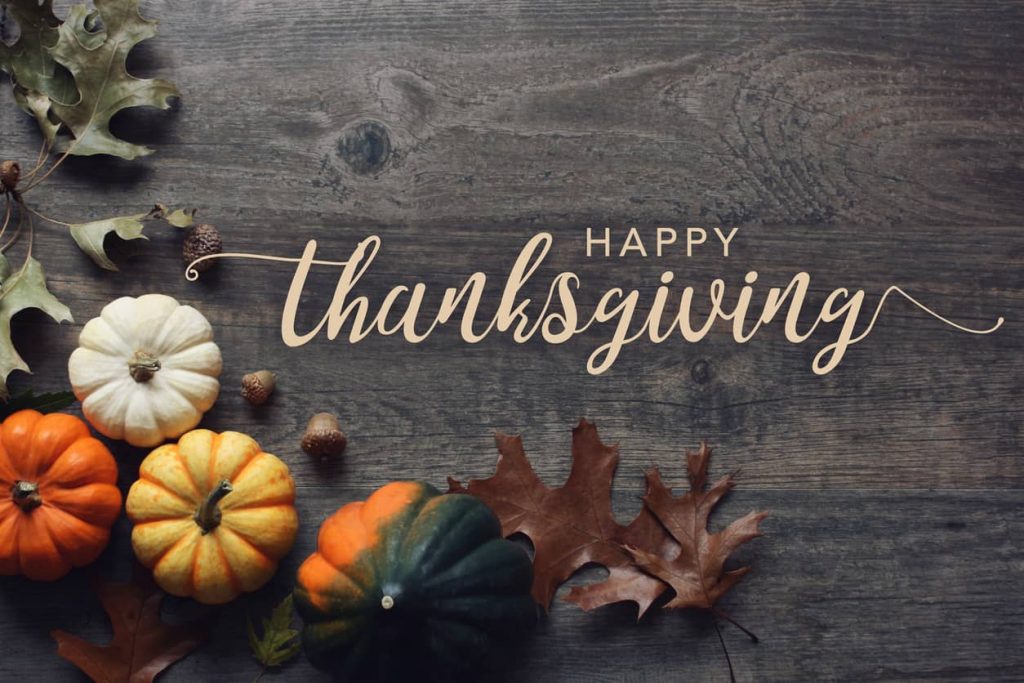 Today begins Thanksgiving week for most of us in this country. A time when family gathers around a Thanksgiving Feast. The national holiday will be, for some, the only time in the year thanksgiving will be offered to God in prayer.

I can say this with confidence because our culture is a complaining culture. One cannot be grateful while complaining. There are 2 main things we can’t have when we’re complaining:

I can also say with confidence that HAPPY people are also GRATEFUL people regardless of circumstances. This doesn’t mean they’re without problems. NO. They’re happy despite the difficulties of life. Job is given as the classical example of HAPPINESS despite deep trouble. He both PLEASED God, and was called HAPPY.

Despite the deep pain and loss, Job teaches us about HOPE, which comes from maintaining gratitude toward God.

Here are 8 REASONS to be thankful.

Third, we should give thanks for GOD’S REVEALED WORD. “Now thanks be unto God, which always causeth us to triumph in Christ, and maketh manifest the savour of his knowledge by us in every place.” [2Cor 2:14]

Fourth, those of us who have obeyed the gospel can give thanks for CONVERSION & SALVATION in Christ. “But God be thanked, that ye were the servants of sin, but ye have obeyed from the heart that form of doctrine which was delivered you.” [Rom 6:16-18]

Fifth, we should certainly be aware of the blessings given from above for our DAILY NEEDS. “For every creature of God is good, and nothing to be refused, if it be received with thanksgiving:” [1Tim 4:3-4; James 1:17]

Sixth, we give thanks for PEOPLE, whether we like them or not. “I exhort therefore, that, first of all, supplications, prayers, intercessions, and giving of thanks, be made for all men;” [1Tim 2:1-2]

Seventh, we give thanks for the VICTORY in Christ over death. “But thanks be to God, which giveth us the victory through our Lord Jesus Christ.” [1Cor 15:54-57; Rom 6:23]

The Eighth reason completes this gratitude list by covering the rest. “Be careful for nothing; but in EVERYTHING by prayer and supplication with thanksgiving let your requests be made known unto God.” [Phil 4:6]

You may have also noted above that THANKSGIVING ought to be OFFERED to GOD through and in the NAME of CHRIST.

“And whatsoever ye do in word or deed, do all in the name of the Lord Jesus, giving thanks to God and the Father by him.” [Colossians 3:17]

“Giving thanks always for all things unto God and the Father in the name of our Lord Jesus Christ;” [Eph 5:20]

May not only this week be full of blessings and Thanksgiving, but also every day of every year.

It’s referring to Ephesians chapter 2: “Wherefore remember, that ye being in time past Gentiles in the flesh,… That at that time ye were without Christ, being aliens from the commonwealth of Israel, and strangers from the covenants of promise, having no hope, and without God in the world.”

The writer of Ecclesiastes makes the same point in a very powerful way. He writes about seeking success, wealth, joy and meaningful work, but at the end of the day it’s vanity, “grasping after the wind.” He’s not suggesting that these pursuits are worthless. His conclusion is the same as Paul’s, without God in your life all these things are hopeless. His conclusion of the whole matter is, “Fear God, and keep his commandments: for this is the whole duty of man.” [Ecc 12:13]

Have you ever met someone that appeared to have nothing, no money, had physical disabilities or otherwise devoid of many of this world’s goods but was happy? I have, many times. I met a man, whom I’ve told you about, who had a disease called Fibrodysplasia ossificans progressiva (FOP). It is a disorder in which muscle tissue and connective tissue are gradually replaced by bone (ossified), forming bone outside the skeleton. He was one of the happiest guys I knew. I loved being around him because he brightened every room he entered.

How can anyone in a condition like that be happy? It was by no cause of his own, it happened to him beginning from his youth up. He experienced daily pain because of his disease but brought joy to those around him. How did he do it, what’s the key? I’ll tell you, he looked forward to being with God. In other words, he had purpose. This is true of nearly everyone who, despite the difficulties of life, are happy. They have found purpose, meaning and a direction.

THE KEY TO TRUE JOY…PURPOSE

People with purpose are some of the happiest people on the planet. They will endure great pain & struggle because of purpose.

I read about a study where scientists tossed lab rats into a jar of water that had been placed in total darkness to see how long they would swim to survive. In total darkness it took 3 minutes before they gave up. Then they took the rats and placed them in the same conditions, but this time with a small ray of light at the top. How long did the rats struggle this time? 36 hours! When they had a light, a possibility of escape, they were able to endure.

Think about how strong we can be when we have hope, true hope that is in Christ. We can face tomorrow when we know that we’ve been reconciled to God in Christ. Paul finishes his command to remember by saying, “But now in Christ Jesus ye who sometimes were far off are made nigh by the blood of Christ.”

The next time life gets you down, and it will, look up and be reminded that God loves you, and that He sent His Son to provide you a way of escape.

“Behold, we count them happy which endure. Ye have heard of the patience of Job, and have seen the end of the Lord; that the Lord is very pitiful (compassionate), and of tender mercy.” [James 5:11]

To a workaholic, Balance is equivalent to failure. A sluggard will bemoan the fact that balance includes work. The truth is, if we fail to take time for important things, we get off kilter and fail to enjoy life to it’s fullest.

Regardless of how busy we are, here are 10 keys for a balanced life…

Before BALANCE can happen, one must be in Christ. Are you in Christ? If no, then your life will always be out of balance.