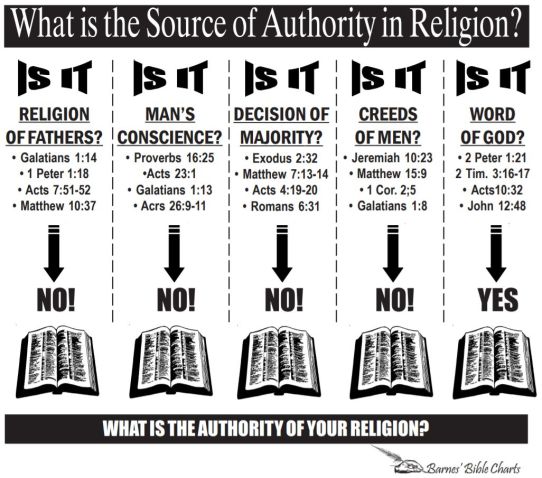 We’re addressing how to answer Ad Hominem ATTACKS; Ad Hominem means; in a way that is directed against a person rather than the position they are maintaining.

Christians are to expect ATTACKS both personally & physically. “And ye shall be hated of all men for my name’s sake: but he that shall endure unto the end, the same shall be saved.” [Mark 13:13]

We must always remember not to respond in kind with our own personal attack. This would not be the example that Jesus gave when He responded to His attackers. [1Peter 2:23; Isa 53:7]

The fourth ATTACK sounds like this: “Your method of determining AUTHORITY (Command, Apostolic Example, Necessary Inference and the prohibition of Silence [CENIS]) are made up by Alexander Campbell who is the founder of the church of Christ.”

I’m blending 2 separate attacks into one as they’re related. 150 years ago, until about 30 years ago, the attack focused on calling members of the Lord’s body, ‘CAMBELLITES.’ (this is why we’re putting this as an ad hominem attack) The attack was an attempt to show that the church of Christ in America was founded by Alexander Campbell. This is easily refuted noting that Campbell never sought to START a new denomination, rather that he sought to RESTORE the church we read about in the New Testament. Evidence exists that shows the church of Christ was small but already present in America before A. Campbell was even born!

In more recent years, this argument still exists but focuses on the fourfold pattern of how to determine Scriptural Authority (Command, Apostolic Example, Necessary Inference and the prohibition of Silence [CENIS]). The objectors say that Alexander Campbell invented a new Hermeneutic (a method or theory of interpretation). This short article will show that CENIS is the way people communicate.

HOW WOULD YOU ORDER A PIZZA?

COMMAND. A direct command is to give an authoritative order of what you specifically desire. “I want a pepperoni pizza.” This direct command eliminates all other variety of toppings. When specifying a thing, you automatically eliminate all other unstated options.

EXAMPLE. “one that serves as a pattern to be imitated or not to be imitated.” Miriam-Webster. Another way of saying example is with the word “show.” When ordering a pizza, I can show you a picture or description of it from the menu. This becomes the “approved example.” There may be other examples on the menu, but those are unconnected to the command.

NECESSARY INFERENCE. To infer is what we do when another implies (to express indirectly) in their communications. It’s implied in my ordering a pizza that it will be a round bread, with Italian style sauce and cheese baked in an oven. The remaining toppings to be specified by direct statement. We Necessarily Infer when we have only one option available from the indirect command. We necessarily infer bread, sauce & cheese unless otherwise indicated.

SILENCE. That means absence of direction. When you order a pepperoni pizza, your silence about soup, salad or other items prohibit their inclusion. Would you pay a bill, charging you with extra items for which you didn’t order nor desire? You would very likely REFUSE them altogether. Silence is not a blank check to do whatever you want. “You didn’t say not to” is not a viable excuse.

Some argue that we can do whatever God hasn’t specifically prohibited. Try ordering a pizza by listing all the things you DON’T WANT. People communicate by stating, showing & implying what they DO WANT. Silence prohibits.

If this is wrong, please educate me without Telling me (command), Showing me (example), or Implying (we infer).

Alexander Campbell didn’t invent this, God did. He created humans and communication, therefore He created this logical reasoning on how to know what He wants. What He orders is much more vital to our life than pizza. [Matt 4:4]