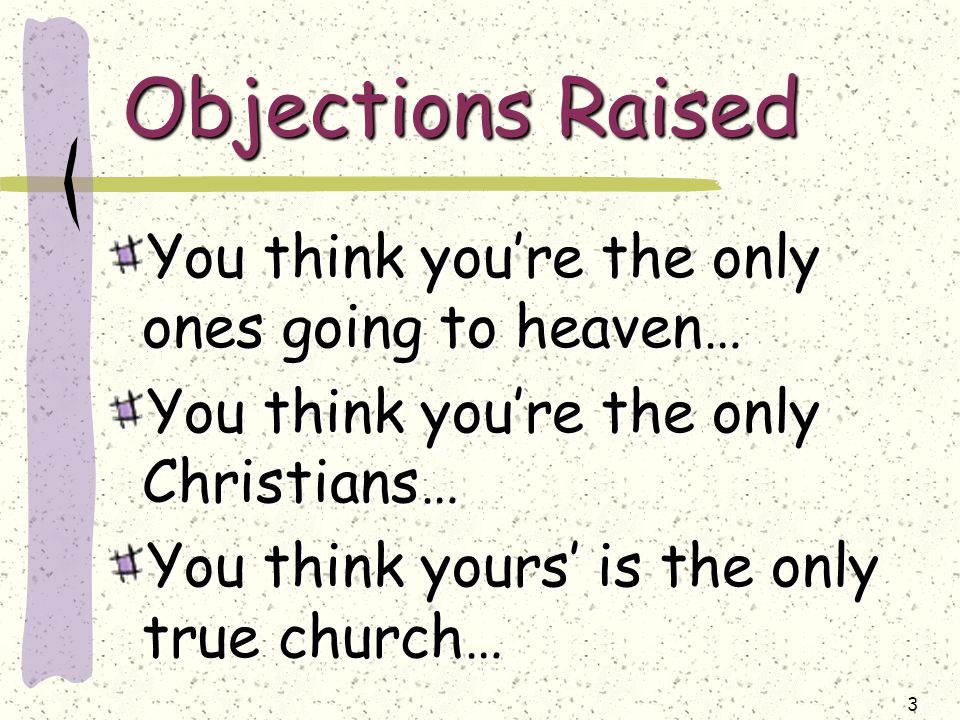 We’re addressing how to answer Ad Hominem ATTACKS; Ad Hominem means; in a way that is directed against a person rather than the position they are maintaining.

Christians are to expect ATTACKS both personally & physically. “And ye shall be hated of all men for my name’s sake: but he that shall endure unto the end, the same shall be saved.” [Mark 13:13]

We must always remember not to respond in kind with our own personal attack. This would not be the example that Jesus gave when He responded to His attackers. [1Peter 2:23; Isa 53:7]

The second ATTACK feels & sounds like it’s right: “You THINK you’re the only ones going to heaven!”

This sounds like a doctrinal rebuttal, but it is based on emotional feelings alone. It carries the presumption that denominational divisions are authorized by God. This attack brings upon the brethren ridicule, mocking and antagonism. “INTOLERANCE” is another code word that often accompanies this attack. Other words tossed in for good measure are, cult, mean-spirited and judgmental. In reality, it has zero scriptural foundation and is thus an Ad Hominem attack.

HOW CAN WE RESPOND? Because the attack has zero biblical foundation, we MUST appeal to the bible for our response. One of the more effective ways is through the seeking of common ground, showing of a bible passage and the asking of a question.

First, I admit that the statement is TRUE. One passage, among many, that can be shown is 2Thessalonians 1:8. “In flaming fire taking vengeance on them that know not God, and that obey not the gospel of our Lord Jesus Christ:” The question then is, “What does this scripture teach about who will be saved & who will be lost?”

You should then note that NOT every believer has obeyed and is thus excluded. “Nevertheless among the chief rulers also many believed on him; but because of the Pharisees they did not confess him, lest they should be put out of the synagogue:” [John 12:42] This clearly shows that belief must move into action. [cr. Romans 10:9,16].

Lastly you can show that just because there’s only one church doesn’t mean that God is trying to exclude or KEEP anyone out of heaven. God desires that all men repent & obey the gospel. “The Lord… is not willing that any should perish, but that all should come to repentance.” [2Peter 3:9b] The gospel is for all, “Who will have all men to be saved, and to come unto the knowledge of the truth.” [1Tim 2:4] Unfortunately, some will exclude themselves, “Because strait is the gate, and narrow is the way, which leadeth unto life, and few there be that find it.” [Matt 7:13-14] The question to ask is, “What does God expect of us?”

Thus, the scriptures teach that only group of people will be saved, those who have obeyed the gospel and have been added to the church of Christ. [Acts 2:41,47]