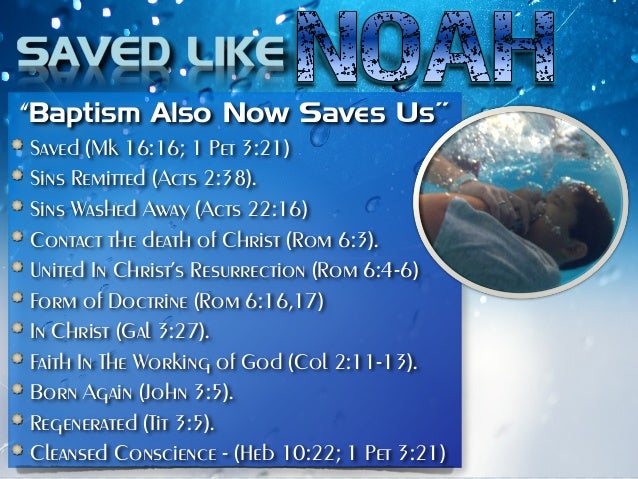 6 more SIMPLE OBJECTION #2; What happens when you’re under the water at baptism?

The Objection goes like this: “What’s in the Water?” They mostly ask this in a mocking tone as if we believe in ‘magic water.’ This seldom is asked seeking an answer. Let’s answer this question without the mockery in which it is asked.

WATER has been in God’s word for a long time. Noah was saved by Water. Peter says in his 1st letter, “eight souls were saved by water.” [3:20]. He uses that example to explain that Water Baptism saves us. “The like figure whereunto even baptism doth also now save us (not the putting away of the filth of the flesh, but the answer of a good conscience toward God,) by the resurrection of Jesus Christ:” [21]

At another place, Naaman was told to dip (be baptized) in water to rid himself leprosy. [2King 5:9-14] According to the Holy Spirit through Paul, Moses & Israel were baptized by the waters of the Red sea; “And were all baptized unto Moses in the cloud and in the sea;” [1Cor 10:2] These are just 3 examples of many. People that reject water baptism are rejecting God’s use of water throughout scripture.

ACTIVE FAITH is in the water. Submission to God’s commands is in the water. Paul said, “Whereupon, O king Agrippa, I was not disobedient unto the heavenly vision:” [Acts 26:19] What did Paul (then called Saul) obey? He was BAPTIZED. [Acts 22:16] James chapter 2 clearly shows that faith is active & obedient.

TRUSTING faith is in the Water. We trust that God cleanses us of sins & saves us in the water. We can’t do it; we submit through faith.

“Then they that gladly received his word were baptized: and the same day there were added unto them about three thousand souls.” [Acts 2:41]

“And the Lord added to the church daily such as should be saved.” [Acts 2:47]

This is not local church membership as some have supposed. Water Baptism is when GOD adds to the universal church of Christ. Denominational baptism is not God’s baptism.

RESURRECTION to newness of life can only occur after Death, Burial & Baptism into water. Salvation occurs upon faithful baptism. [Acts 2:41; 16:30-34] Baptism is obedience to the Gospel. Jesus will take vengeance on those who do not obey the gospel [2Thess 1:8-9]. How does one obey the gospel? Since the gospel is the Death, Burial & Resurrection of Jesus [1Cor 15:1-4], It harmonizes that water baptism is Death to sin, a Burial and Resurrection to walk in newness of life. [Rom 6:3-4]

Sprinkling or pouring are not emblematic of a burial. [Col 2:12]

People in the denominational world want to rid water from God’s plan of salvation. Oh, they’ll say it’s important, one false teacher even said, “Baptism is not essential to salvation, but you aren’t saved if you refuse it.” That’s confusing. When you show them the simple instructions of the Master, (Mark 16:16) they still can’t see it. So, let’s take a different approach by asking, WHAT CAME FIRST, WATER OR SALVATION?

When you open your Bible, you won’t go far before you come to THE STORY OF NOAH’S ARK (Genesis 6-8). A novice could answer the question, WHAT CAME FIRST, WATER OR SALVATION?

Noah was commanded to build an ark. He moved with Godly fear and built the ark, according to the pattern (Heb 11:7). He entered the ark with his family. God closed the only door. It rained. The ark rose above the water. Everyone outside of the ark died. The ark landed on Ararat. Noah & his family were saved. He Heard God’s instructions, Believed, Obeyed, WATER.

A LITTLE FURTHER ALONG and you’ll read of the Israelites in Egyptian bondage (Exodus 1-14). Once again, a casual reading reveals a similar story. Moses heard God’s instructions. He believed. They obeyed God’s instruction. They found themselves by the red sea with Pharaoh’s army in pursuit. They walked on dry ground surrounded by WATER. They were free on the other side of the water, while Pharaoh’s army drowned.

KEEP READING and you’ll come to the story of a man named Naaman who had leprosy (2King 5:1-14). He HEARD about a cure and BELIEVED it was true, so much that he brought great wealth to pay for it. However, those weren’t the instructions. The instructions were to dip seven times in the Jordan river. He became angry and wanted a modification to the instruction. That wasn’t in the message either. So, after a little reasoning with his servant, humbly he went to the WATER in obedience. Then, and only then did he receive the cure.

IN THE NEW TESTAMENT we read of a man born blind, (John 9:1-7). This story has some amazing similarities to the others. He HEARD some instructions. BELIEVING them, he went in faithful OBEDIENCE to the pool of Siloam. WATER was the dividing line between blindness and sight.

WITH ALL THESE ACCOUNTS before us, we ask again, WHAT CAME FIRST, WATER OR SALVATION? The answer is clear…WATER. God desired water to be the dividing line between the Fully convinced believer and Salvation.

NOW, AS WE LOOK AT His command for salvation under the New Covenant, what do we find?

“And now why tarriest thou? arise, and be baptized, and wash away thy sins, calling on the name of the Lord.”

“The like figure whereunto even baptism doth also now save us (not the putting away of the filth of the flesh, but the answer of a good conscience toward God,) by the resurrection of Jesus Christ:” (1Peter 3:21)

“But when they believed Philip preaching the things concerning the kingdom of God, and the name of Jesus Christ, they were baptized, both men and women.”

THIS IS THE PATTERN of the New Covenant. Jesus commanded baptism, the Apostles taught it and believers obeyed it prior to their salvation. The question now becomes; do you love Jesus enough to do what He says? (Luke 6:46; John 14:15) Or will you follow the pattern of the Pharisees? “But the Pharisees and lawyers rejected the counsel of God against themselves, being not baptized of him.” (Luke 7:30)

For further study there are additional scriptures on the (here).