ON SEPTEMBER 23, 1911 the ‘devil’ obeyed the gospel. I’m certainly not talking about ‘THE’ devil, Satan. This article is about a man who was about as devilish as human man can be.

As a youth, his devilish tendencies were quite apparent. As is often the case, his brother was called the preacher on account of his good behavior, whereas our subject acquired ‘devil’ as a moniker for his devilish behavior. “He liked to carry on and play pretty rough at times.”

In his early twenties, he became an actual rebel. Being a southern sympathizer, he organized a group of rebels to engage in guerrilla attacks on Union installations during the war between brothers. Among his “Wildcats” guerilla fighting unit was a good friend named Dyke Garrett. Dyke found the brutality of war deplorable, denouncing it as against God’s will. After the war Dyke began to think much more seriously about Christianity and obeyed the gospel under the teaching of one Alexander M. Lunsford.(1) Lunsford himself being a student of another Alexander. The Devil and Dyke remained lifelong friends.

However, the ‘devil’s’ vengeful side showed up when one of his friends was shot & wounded. The ‘devil’ vowed and subsequently followed through with his promise to have retribution. This vengeance streak ran through the blood of his kin and another death was attributed to the ‘devil’ and his family.

It wasn’t long before the ‘devil’ and his family got into a feud with a neighboring family over a hog. Things escalated quickly after that. When the ‘devils’ brother was killed in the feud, he went all in killing 3 of them in retaliation. (2)

“Dearly beloved, avenge not yourselves, but rather give place unto wrath: for it is written, Vengeance is mine; I will repay, saith the Lord.” [Rom 12:19]

There were several more battles, and as many as 15 lives lost in the feud, including five children in the war between families that lasted for over 28 years.

For most, that’s the end of the story, but it wasn’t the whole story for the ‘devil.’ Some 20 years later, the ‘devil’ got some new information. He received some good news from his old war buddy, Dyke. 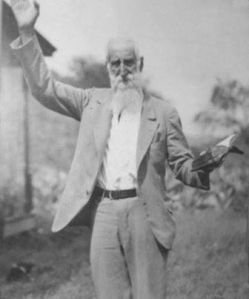 You’ll recall, Dyke had turned to Jesus obeying the gospel. Not only that, He became a circuit preacher for the church of Christ in the parts where the ‘devil’ lived.

Having been a friend of the ‘devil’ he went to him personally to deliver the good news. Receive it he did and at the urging of his friend, the ‘devil’ went to a gospel meeting and at the end of that meeting he went forward to repent and be baptized for the remission of his sins. They went down to the waters of Island Creek where Dyke Garrett baptized Anse ‘the devil’ Hatfield into Christ. (3) The feud between the Hatfield’s & McCoy’s was over. At least it was over for the ‘devil’ now turned child of God. 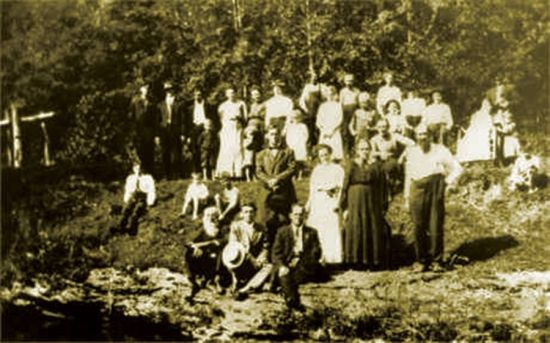 Anse ‘devil’ Hatfield standing on front right with hand on hip. Dyke Garrett is the seated man with white beard on front left.

According to those that knew him, Devil Anse spent the remainder of his life in peace, with the knowledge that God had forgiven him, his sins washed away in the blood of the Lamb in a cold mountain spring.

“For I am not ashamed of the gospel of Christ, for it is the power of God to salvation for everyone who believes, for the Jew first and also for the Greek.” [Romans 1:16]